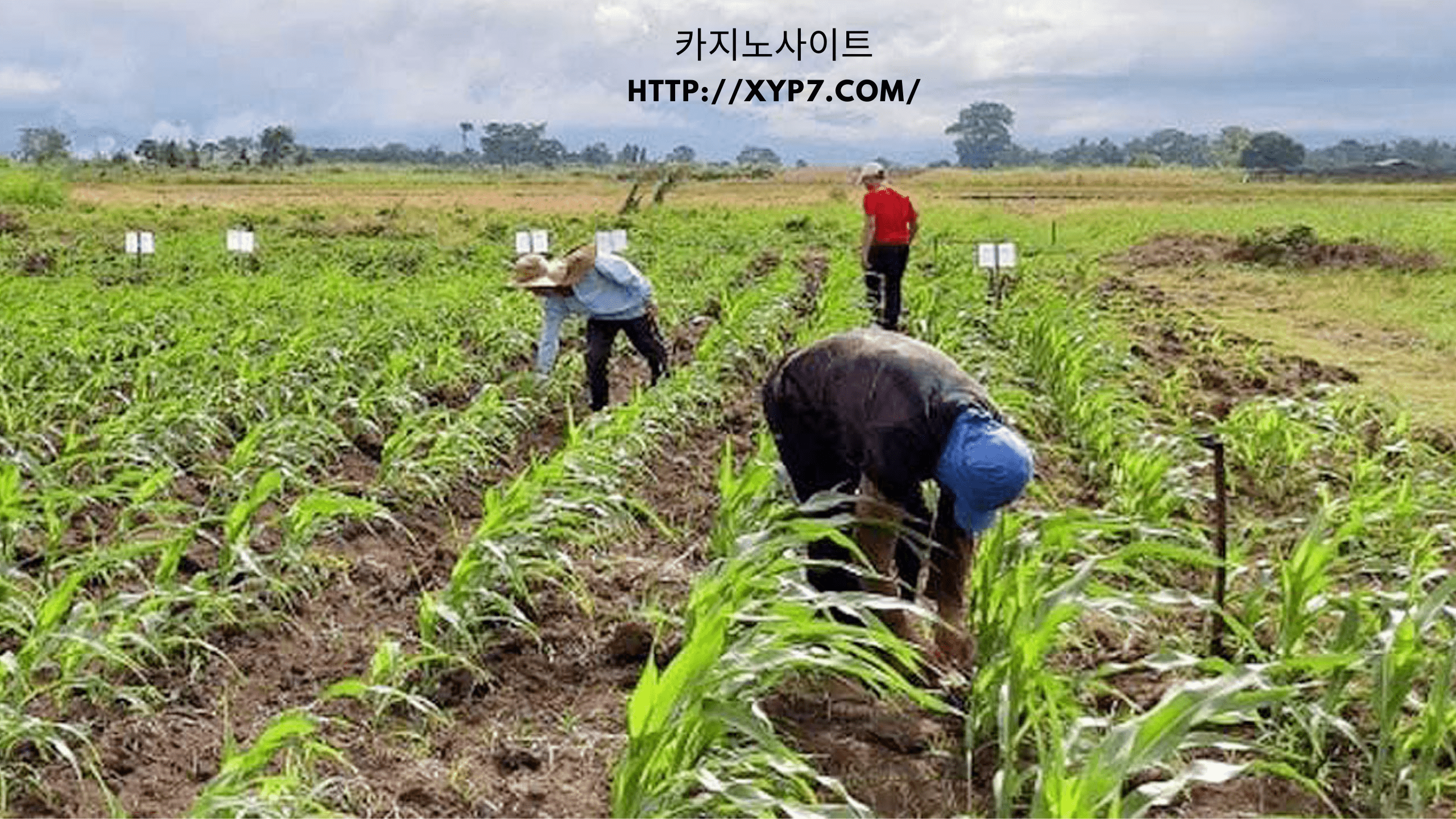 Ahead of COP27, the World Economic Forum spoke with Nigel Topping, the UN’s High-Level Champion for Climate Change for COP26.

From carbon credits to agriculture and food, here are his views on the nature-positive agenda, where climate action is succeeding and where more work is needed. 카지노사이트

Nature has climbed up the agenda alongside net zero in the past 12 months. Why is it important for the private sector to focus on nature in the context of climate action?
Nigel Topping: “There are a couple of reasons. First, it feels like everybody understands that we have to get to net zero and beyond as quickly as possible because we’re seeing the economic and human costs of climate change pretty much every week. And we can’t get there without nature. In broad terms, nature is about a quarter of the problem and around a third of the solution.

But there’s also a macro reason – particularly for companies in the food, land and agriculture system. We’ve just published some research which shows that if the biggest food and agriculture companies don’t take a nature-positive approach, there’s up to 26% of value at risk by 2030. But always, when there’s a big risk, there are big opportunities for those who get ahead of the risks — and that’s a $4.5 trillion opportunity. 안전한카지노사이트

By now, we’re all used to the fact that we have to make an almost complete energy transition. We’re also going to have to make a massive transition in food, land use and agriculture as well.”

Research by Race to Zero, the global campaign of non-state actors that you lead, shows that 94% of forest, land and agriculture companies that have committed to net-zero are at risk of missing their commitments due to a lack of action on deforestation. What actions do companies and investors need to take, and by when?
Nigel Topping: “Well, we now have a lot more data and methodologies emerging around nature – from organizations such as the Science Based Targets Network and the Task Force on Nature-Related Financial Disclosures – to help companies better understand the risks and opportunities and to set robust targets. But if the target is not ambitious enough, then the action definitely won’t be.

But, as you say, we really need to take action. We’ve got to halve emissions this decade. In particular, we need to cut out all practices which are driving deforestation in order to produce commodities like soy, palm, beef and timber. That needs to be eradicated this decade.”

At COP26, 13 of the world’s largest agri-food businesses announced they would accelerate action to halt deforestation in their supply chains in line with a 1.5°C pathway and produce a roadmap by COP27. Are these commitments deep and broad enough? 카지노사이트 추천
Nigel Topping: “Well, of course, these companies are the lynchpin of the global food trading system. So if they’re not aligned with 1.5, it would be very difficult. The world has missed lots of 2020 deforestation targets. So we can’t see revised roadmaps forever. What we’ve got to see at COP27 is that companies are implementing these roadmaps.

“Everybody needs to accelerate because this is the decade where we either tackle deforestation or lose grip on the possibility of 1.5 degrees.”

”
— Nigel Topping, High-Level Champion for Climate Change, UN
We also need to see a critical mass of banks aligning their trade finance practices with zero deforestation — as well as investors and food manufacturing and distribution companies — so that the whole system gets aligned. Everybody needs to accelerate, because this is the decade where we either tackle deforestation or lose grip on the possibility of 1.5 degrees

Race to Zero is calling on companies to sign a commitment letter to eliminate deforestation in supply chains by 2025. What else do they need to do?
Nigel Topping: Just eliminating the negative is part of the solution. But we also need to start seeing investment in the alternatives. For example, Nestle is investing 1.2 billion Swiss francs into regenerative agriculture, supporting 500,000 farmers and 150,000 thousand suppliers. That’s the sort of thing we need from major players in the global food system.

There’s some encouraging progress. For example, there are more than 700 million hectares of degraded agricultural land in Africa alone. At COP26, 32 African countries committed to restoring over 100 million hectares and called for $2 billion in investment. It’s called AFR100 – the African Forest Landscape Restoration Initiative. Several funds have already started to invest.

And the interesting thing about regeneration is that it immediately improves farmer livelihoods because it goes straight to productivity improvement. That’s the underlying story here. This is all about development: jobs, income, economic growth. For some communities, emissions reductions are the third or fourth down the list of priorities.”

In terms of how much? It’s complicated. But about $2 trillion a year more is needed in emerging and developing economies, excluding China. About 70% of that needs to come from the private sector. Look at Africa, where a large majority of people are working in agriculture. There’s a huge need for investment in smallholder farmers, but also in small- and medium-size enterprises (SMEs). For example, a really exciting start-up in Nigeria is making solar-powered cool boxes that massively reduce food waste while moving vegetables around in a hot, humid country. As well as investing in companies that provide services to the market, we need to provide loans to SMEs that are the backbone of the food system in emerging markets. There’ll be a lot of focus on that at COP27 in Sharm el-Sheikh.

So yes, this is about investment from multinational partners, but also crucially from participants in the value chain and local companies. Remember, this is a growth story, so there’s a reason for investing in changing practices.”

How committed are investors to the nature-positive agenda? What’s their role and do we need a kind of GFANZ (Glasgow Financial Alliance for Net-Zero) for nature?
Nigel Topping: Well, whenever you’ve got a commitment to zero, you really need a commitment to being nature positive – because you can’t have one without the other. Mark Carney has been very outspoken on this and GFANZ has published some guidance recently.

At Race to Zero, we’re working on getting more of the finance sector to sign our commitment letter on ending commodity-driven deforestation. If you’re an asset manager, that commitment means managing the food and agriculture companies in your portfolio to ensure that they are driving out the practices which produce commodities on deforested land.

And these actions are increasingly aligned with the law, such as Europe’s new regulation banning the sale of products that have come from degraded or deforested land. So what we are seeing quite quickly is investors making their expectations clear. Those companies who’ve set targets but aren’t implementing them are going to come under more and more pressure from their owners, as well as from regulators, to do so.

Many of the pressures on companies to change are market-based – but how important is regulation?
Nigel Topping: There’s definitely a role for regulation. Race to Zero recently published The Pivot Point, a report that calls for an urgent transition from voluntary leadership to globally consistent standards to deliver a net-zero world. We cannot expect systemic shifts to be based on voluntary initiatives alone, because some people will always hide. So this has to be regulated.

“Net zero targets now cover over 90% of the global economy. Yet fewer than one-fifth of net zero targets set by national and subnational governments and only a third of the largest public corporates with net zero targets actually meet science-aligned criteria.”

— Race to Zero
Regulators put an infinite price on certain activities, by making them illegal. But systems are complicated. It’s very difficult to get the perfect regulation in a short period of time. So during this transition, the ratcheting of pressure from investors makes it easier for regulators to be bolder. And vice versa. It’s what we call the “ambition loop”. This needs everybody to move as fast as they can, and be vocal about it, because that involves others.

There’s also a huge role for local regulations. You need supply-side and demand-side regulations, but they’ve all got to be implemented.

You’ve written: “the only currency that matters now is the quality and pace of delivery.” A year on from Glasgow, has there been sufficient or encouraging progress, particularly on the nature-positive agenda?
Nigel Topping: Not sufficient, but encouraging — yes, in that commitments were made and we’re starting to see money flow into them. We’re seeing good progress on AFR100 to restore degraded land in Africa, as I mentioned. Interestingly, a lot of those investments rely on carbon credits, where there’s been a maturing of the conversation from a sort of frothy enthusiasm, to markets with very weak standards, to a kind of Puritanism that says nothing will work and everything must be banned. Now we’re starting to see a real focus on the quality of standards on the supply and demand side.

We’re also starting to see follow-through on the AIM4C (Agricultural Innovation Mission for Climate) agenda initiated by the United Arab Emirates and the USA. Meanwhile, Egypt has launched its FAST (Food and Agriculture for Sustainable Transformation) initiative. And now we have regenerative agriculture incorporated into the Breakthrough Agenda, launched at COP26 in Glasgow to promote clean technologies to help keep 1.5°C in reach.

There’s a growing number of countries committed to investing in the technologies needed to make the low- or zero-carbon option the most competitive by 2030. So we are seeing momentum among governments, as well as more private sector interest. We’re hoping to see a lot more evidence in Sharm el-Sheikh, and then we’ll try and ratchet it up to go faster.

But one issue in Brazil is that millions of hectares of land can still be legally deforested. How can we incentivize people not to clear land that they’re allowed to deforest?
Nigel Topping: So the reason that money is starting to flow into some of the African regeneration is that the economic model has been unlocked to find a way to finance that work and this quite quickly leads to productivity improvements. That becomes a self-reinforcing cycle. We also see examples like Costa Rica, where there’ve been payments for standing forests for a long time, or Gabon, where 88% of the forest is still standing, but they’ve really struggled to get payment for that. Now, finally they’re bringing 90 million tonnes of carbon credits onto the international markets. We need to make sure we’re not just lecturing people to not take an income from their available commodity, but we’re actually incentivizing them not to do so.

The High-Level Champions have put a lot of energy into this agenda. What’s next for your work?
Nigel Topping: We’re trying to significantly increase the number of financial institutions signing the commitment letter to eliminate commodity-driven deforestation, because we know there’s a direct line from clear public commitments to actions. Just as with the net-zero commitment, we’ve seen a lot more stringency on eliminating the financing of coal, for example, that comes directly as a result of making a public commitment to net-zero.

And we’re working particularly with the largest companies all along the value chain in the race to zero to ensure they’re not just reporting on their achievements but also making commitments to invest in the capabilities of smallholder farmers and SMEs to bring about regenerative agriculture and restore deforested land.